Obstructive sleep apnea, or simply sleep apnea, can cause fragmented sleep and low blood oxygen levels. For people with sleep apnea, the combination of disturbed sleep and oxygen starvation can lead to hypertension, heart disease and mood and memory problems. Sleep apnea also increases the risk of drowsy driving.

There are a number of factors that increase risk, including having a small upper airway (or large tongue, tonsils or uvula), being overweight, having a recessed chin, small jaw or a large overbite, a large neck size (17 inches or greater in a man, or 16 inches or greater in a woman), smoking and alcohol use, being age 40 or older, and ethnicity (African-Americans, Pacific-Islanders and Hispanics). Also, OSA seems to run in some families, suggesting a possible genetic basis.

Chronic snoring is a strong indicator of sleep apnea and should be evaluated by a health professional. Since people with sleep apnea tend to be sleep deprived, they may suffer from sleeplessness and a wide range of other symptoms such as difficulty concentrating, depression, irritability, sexual dysfunction, learning and memory difficulties, and falling asleep while at work, on the phone, or driving. Left untreated, symptoms of sleep apnea can include disturbed sleep, excessive sleepiness during the day, high blood pressure, heart attack, congestive heart failure, cardiac arrhythmia, stroke or depression. 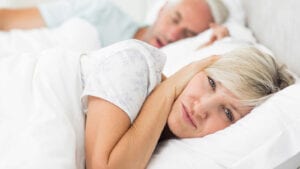 If you suspect you may have sleep apnea, the first thing to do is to see your doctor. Bring with you a record of your sleep, fatigue levels throughout the day, and any other symptoms you might be having. Ask your bed partner if he or she notices that you snore heavily, choke, gasp, or stop breathing during sleep. Be sure to take an updated list of medications, including over the counter medications, with you any time you visit a doctor for the first time. You may want to call your medical insurance provider to find out if a referral is needed for a visit to a sleep center.

One of the most common methods used to diagnose sleep apnea is a sleep study, which can be done from home and only rarely require an overnight stay at a sleep center. The sleep study monitors a variety of functions during sleep including sleep state, eye movement, muscle activity, heart rate, respiratory effort, airflow, and blood oxygen levels. This test is used both to diagnose sleep apnea and to determine its severity.

The first line treatment for obstructive sleep apnea is usually continuous positive airway pressure device (CPAP). CPAP comprises a mask that is fitted over the nose and/or mouth, and gently blows air into the airway to help keep it open during sleep. This method of treatment is highly effective if it can be tolerated for a minimum of 4 hours a night.

Other methods of treating sleep apnea include: dental appliances which reposition the lower jaw and tongue; upper airway surgery to remove tissue in the airway; nasal expiratory positive airway pressure where a disposable valve covers the nostrils; and treatment using hypoglossal nerve stimulation where a stimulator is implanted in the patient’s chest with leads connected to the hypoglossal nerve that controls tongue movement. These leads stimulate the hypoglossal nerve to move the tongue while sleeping in order to maintain an open airway.

Lifestyle changes are also effective ways to mitigate symptoms of sleep apnea. Here are some tips that may help reduce apnea severity:

The most important part of treatment for people with OSA is wearing a treatment device whenever they sleep. The health benefits of therapy can be enormous, but only if used correctly. If you are having problems adjusting your CPAP or you're experiencing side effects of wearing the appliance, talk to your doctor or dentist who prescribed it and ask for assistance.

Getting adequate sleep is essential to maintaining health in OSA patients. If you have symptoms of insomnia such as difficulty falling asleep, staying asleep, or waking up unrefreshed, talk to your doctor about treatment options. Keep in mind that certain store-purchased and prescription sleep aids may impair breathing in OSA patients.

We'll do everything we can to deliver an optimal experience & excellent patient care!